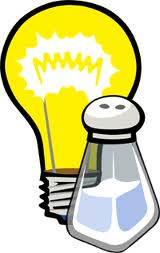 Christians, we are called to be salt and light…that is a significant calling.  Salt is both a flavor enhancer and a preservative. Light is the element that both exposes and casts out darkness. We as God’s people are called to bring light to the world.  We are the ones to show the world the reality of its sinful and hopeless state.  We are the ones to enhance life through freedom and preserve the life God intended for his people.  But, this is no easy task.  By stepping out, we expose ourselves to temptation and to criticism. We are rejected or minimized for being weird.  Also if we make a mistake, we are opening ourselves and God up to abuse.

So it is easier to step back, be quiet and let the ones we know quietly go to hell.  That is not acceptable.  We need to enhance and preserve the faith.  We need to shine before the world.  This is accomplished by faith, and is continued as we humbly follow Christ in this amazing journey.  God neither expects nor demands perfection.  He simply requests that we follow and seek his leadership and power.  He will accomplish—through us, more than we could ever hope to accomplish on our own. The Hymn says it best—“Trust and obey, for there is no other way to be happy in Jesus…but to trust and obey.”

13 “You are the salt of the earth. But if the salt loses its saltiness, how can it be made salty again? It is no longer good for anything, except to be thrown out and trampled underfoot.

14 “You are the light of the world. A town built on a hill cannot be hidden. 15 Neither do people light a lamp and put it under a bowl. Instead they put it on its stand, and it gives light to everyone in the house. 16 In the same way, let your light shine before others, that they may see your good deeds and glorify your Father in heaven.

17 “Do not think that I have come to abolish the Law or the Prophets; I have not come to abolish them but to fulfill them. 18 For truly I tell you, until heaven and earth disappear, not the smallest letter, not the least stroke of a pen, will by any means disappear from the Law until everything is accomplished. 19 Therefore anyone who sets aside one of the least of these commands and teaches others accordingly will be called least in the kingdom of heaven, but whoever practices and teaches these commands will be called great in the kingdom of heaven. 20 For I tell you that unless your righteousness surpasses that of the Pharisees and the teachers of the law, you will certainly not enter the kingdom of heaven.